(SEPTEMBER 11, 2019) – Fewer Filipino voters said they personally witnessed election irregularities during the May 2019 midterm elections, according to the Social Weather Stations (SWS).

In the second quarter survey for 2019, SWS found 10% of Filipino voters personally witnessed vote-buying while 15% reports reading or hearing about it from a reliable source.

This is fewer compared to the June 2016 national elections survey which found 19% personally witnessed vote-buying and 23% read or heard about it. 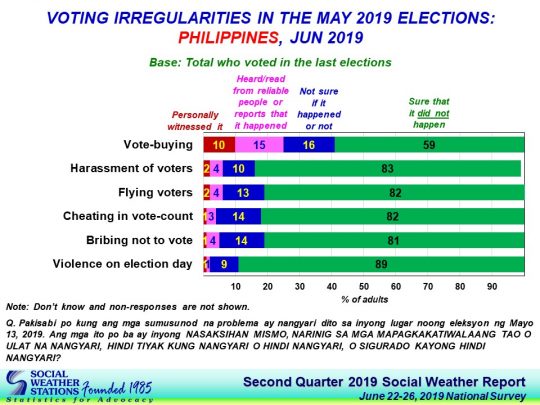 Aside from vote-buying, SWS said fewer Filipino voters claimed they personally witnessed harassment of voters, flying voters, cheating in vote-count or ‘dagdag-bawas’, bribing not to vote, and violence on election day. 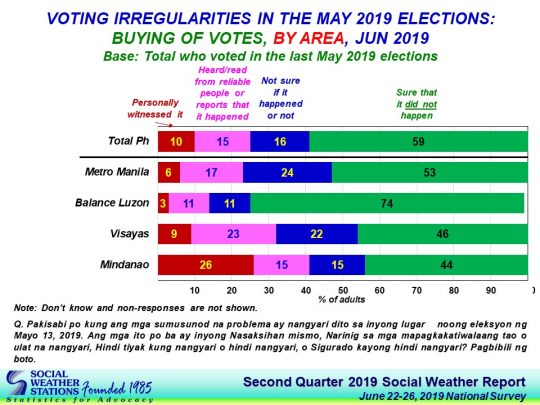 While the number of elections irregularities have dropped, SWS notes the portion of those who have witnessed vote-buying is highest in Mindanao at 26%.

This was followed by Visayas at 9%, Metro Manila at 6%, and Balance Luzon at 3%.

Meanwhile, the proportion of those who personally witnessed bribing not to vote are highest in Metro Manila and Visayas at 2%, followed by Balance Luzon and Mindanao at 0.4%. 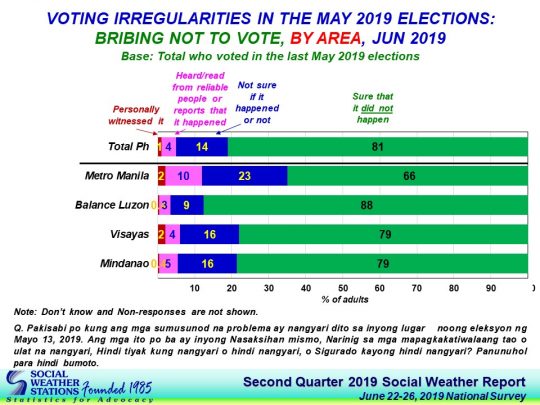 When it came down to the problems encountered during the elections, the top complaint of Filipino voters had to do with the “very long lines”.

53% of the respondents encountered long queues in their voting precincts, while 35% said they encountered no problems.

Tweets by news5aksyon
We use cookies to ensure we give you the best experience on our website.
Close
Cookies Consent Language
"We use cookies to personalize content and ads to provide social media features and to analyze our traffic. We also share information about your use of our site with our social media, advertising and analytics partners who may combine it with other information that you've provided to them or that they’ve collected from your use of their services. You consent to our cookies if you continue to use our website."

TV5 Network Inc. values and respects your right to privacy. We are committed to safeguarding your personal data in compliance with Republic Act No. 10173 or the Data Privacy Act of 2012 and its Implementing Rules and Regulations.